Frustrated by a “Marble” in Your Shoe? Here’s What to Do About a Neuroma

You can sometimes find foreign objects in your shoes (especially if you have kids around), but have you ever heard the tale of the “phantom marble?”

The phantom marble is an uncomfortable feeling in the front of your foot, plaguing runners and workers alike. It feels as if you’re stepping on something. It can really hurt, too, but check in your shoe… and nothing’s there.

All right, so we’re never going to be great at telling spooky stories, but what we are good at talking about is foot conditions. If you feel like you’re stepping on a marble but don’t see anything in your shoe, it’s a good sign that the real problem lies within your foot—likely around a nerve.

It’s called a neuroma, but it’s not as scary as it sounds. 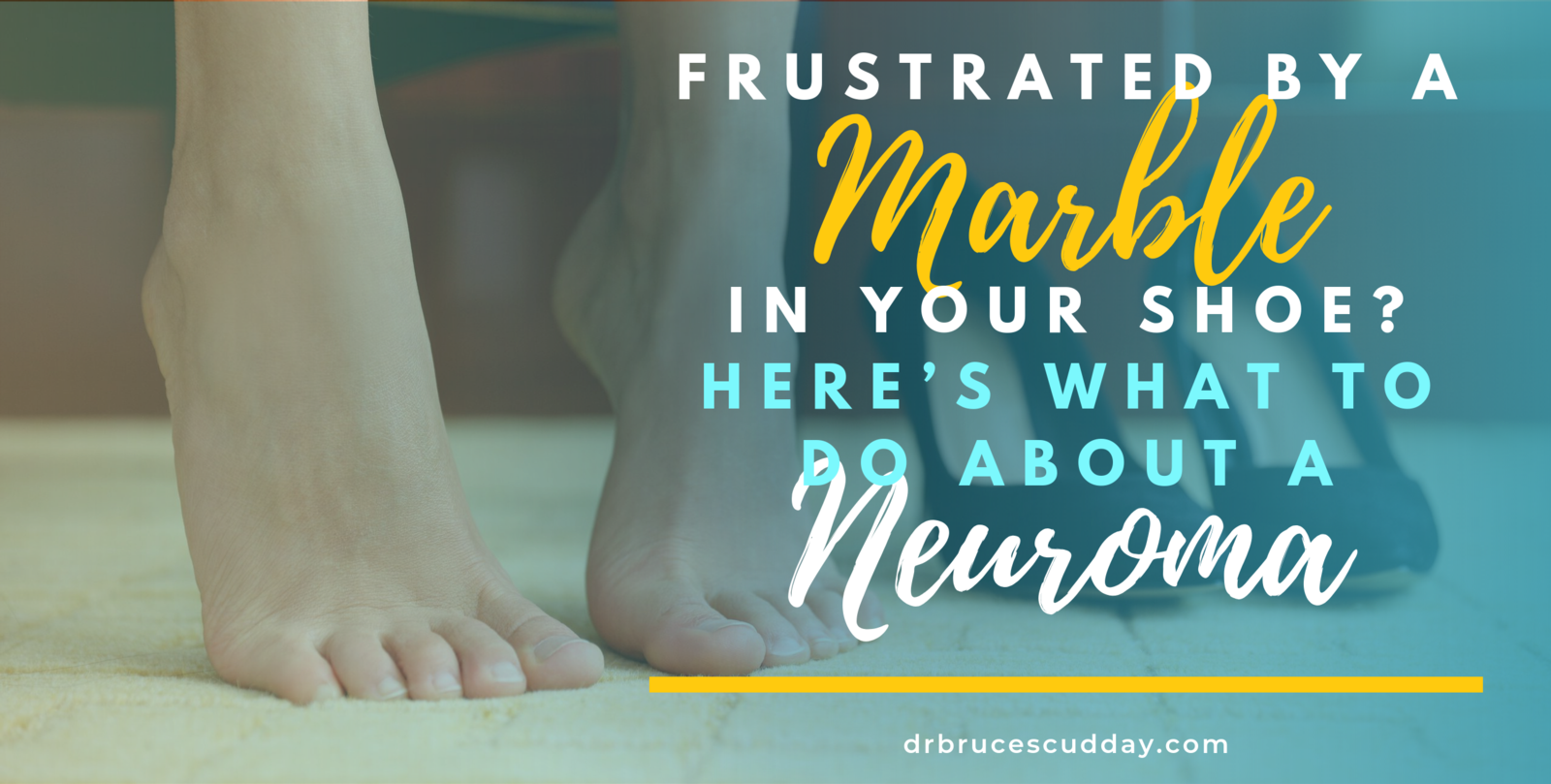 What is a Neuroma?

Although it can often feel like you’re stepping on a lump, a neuroma rarely actually looks like one. The sensation is there, however, because the condition lies mainly around a nerve.

When a nerve, such as one in the forefoot, becomes irritated or injured, a potential response of the body is to grow tissue around that nerve. The tissue is not cancerous, and is believed to be an attempt to protect the trouble nerve.

However, the attempt to protect can lead to problems of its own. As the tissue builds up, the nerve can become compressed or pinched.

When a neuroma is in the forefoot, you may hear it referred to as a “Morton’s neuroma.” This is simply in relation to the location of the problem. All other factors still apply.

Symptoms of a neuroma in the forefoot can vary to a degree. In addition to that sensation of stepping on a foreign object, there may also be:

Keep in mind that not all of these symptoms must be present for a neuroma diagnosis, and none of them should ever be ignored on their own!

Who is Most at Risk for a Neuroma?

Remember that a neuroma is like a pearl: it needs some form of irritation or pressure in order to form. (If only it was as valuable.)

This stimulus can come from several sources—some of which we have more control over than others.

The repetitive impacts of running and other sports can increase neuroma risk, but that doesn’t mean you should cut those activities out! The overall benefits outweigh the risks, and making reasonable choices can significantly reduce your chances of a neuroma. These include wearing the right supportive shoes for your activities and not pushing your feet beyond what they’re currently conditioned to take.

The right shoes are not just essential for exercise, but for general life, too. A good pair of shoes should be all-around supportive and not force pressure toward the front of the foot.

High heels are an especially dangerous type of shoe for neuroma risk. The high back end not only forces one’s weight toward the forefoot, but they often have small toe boxes as well. You’re not only forcing weight against the toes; you’re cramming them together, as well! It’s basically creating a torturous pressure box that’s a prime breeding ground for neuromas.

That said, while there are choices we can make that have an influence on neuroma development, there can also be factors we can’t control.

A shoe can cause weight to be shifted toward the front of the foot, but so can abnormalities and deformities in foot shape. Having high arches or flat feet can shift the way weight is distributed across the foot, contributing to higher risk for many problems—neuromas included.

Direct injury to a nerve can also cause development of a neuroma. Both impact trauma (like dropping something on your foot) or the nerve being damaged in a cut can play a role. 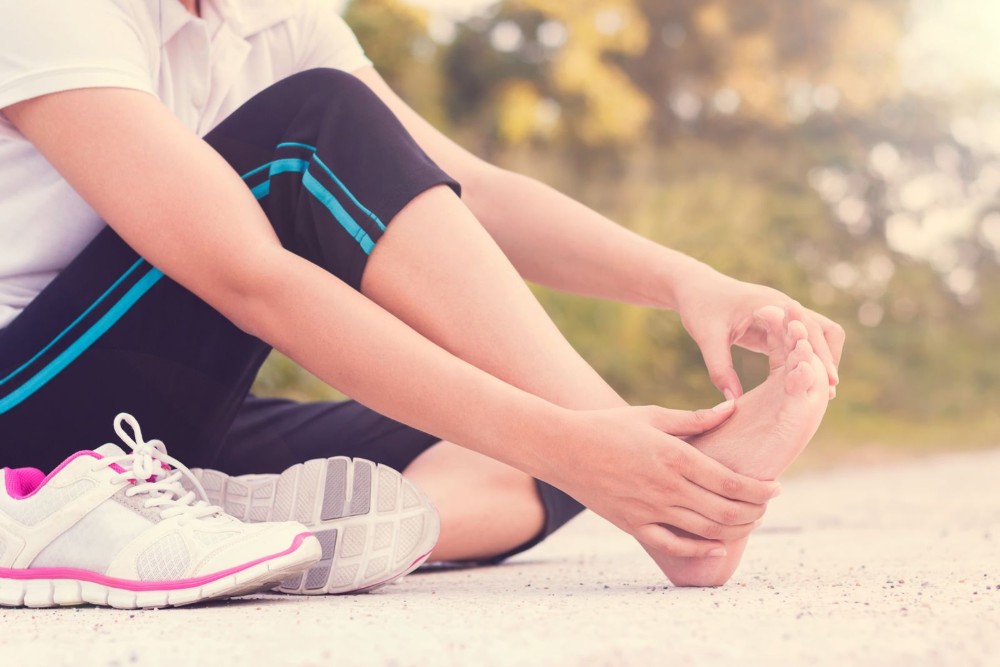 What Should You Do if You Believe You May Have a Neuroma?

Anytime you have foot pain that lasts more than a few days, it’s time to give us a call. A neuroma will very likely not go away on its own unless steps are taken to address the factors contributing to it. Continuing through the pain can increase the chances of the problem becoming worse or longer-lasting.

We can perform a thorough examination of the situation and get to the root of what is causing the irritation.

In many cases, making changes to remove the source of irritation can give a neuroma the opportunity it needs to shrink on its own, eliminating it as a problem. This may mean switching to different shoes, changing up a workout routine, or using devices such as arch supports or custom orthotics to remove pressure.

Sometimes, however, a neuroma may remain after making adjustments. When this happens, we might recommend more advanced treatments such as steroid injections or nerve decompression surgery. We will only ever bring these up if other, more conservative options just haven’t or won’t work.

In some more severe cases, we may suggest removal of the nerve completely, and will fully discuss the pros and cons of such a procedure with you at that time.

Throw Out that Phantom Marble

We have two offices open to serve patients throughout the El Paso area. Give us a call at either to schedule an appointment with us:

If you prefer to reach us via our website, our electronic lines are open! Fill out our online contact form and a member of our staff will reach out to you. Don’t wait a minute longer to get help for your foot or ankle problem!